Yesterday the 3 Day Novel Contest wound up at midnight.  In three days contestants write a novel.  Yup, that’s right.  It’s a short novel – a novella really – but it is complete – 18,000 words in three days.

It is the second time I have entered this contest.  The first time I was unprepared.  Oh, I read all the hints and suggestions on the web page, including their Survival Guide but NOTHING prepares you for the actuality of writing almost non-stop for three days until you have a completed novella. It is a crazy rollercoaster of a weekend.

The first time I entered, I had an idea semi-formed, but when I sat down to write, the whole thing flew out the window and I went in an entirely different direction.  This worked out well for me as it ended up with the publication of Greenwich List.

This time, I decided to take an idea that had been floating around in my head for five years.  I outlined the story in five ‘acts’.  It seemed like a clever idea at the time.  But, as with the first year, all my cleverness turned out to be useless.

I did hold onto my idea, however.  This idea was like a friend.  She had been sitting with me for five long years – tapping at my brain saying “Write me!  Write me!  You know you want to!”  So that’s what I did.  I took my friend and wrote the story that had been clamouring to come out for all these years.  You might be saying now, ‘Diane, what was that idea?’  Well, sorry, not going to tell you.  It came out over the weekend as a novella, but I am planning on turning it into either a full-length novel or part of a collection of stories so you will just have to wait.  I will tell you, however, that it was a horror story. The first I have ever written!  And, while I think I pretty much got it right, I went back afterwards and looked what HP Lovecraft had to say about the genre.  Some of what he wrote is now a bit out of date, but much of it is timeless, especially in regards to weird or horror fiction.

Rules and Themes of Horror Writing as Adapted from HP Lovecraft

The true weird tale has to rule. A certain atmosphere of breathless and unexplainable dread of outer, unknown forces must be present; and there must be a hint, expressed with a seriousness and portentousness becoming its subject, of that most terrible conception of the human brain–a malign and particular suspension or defeat of those fixed laws of Nature which are our only safeguard against the assaults of chaos and the daemons of unplumbed space. – HP Lovecraft 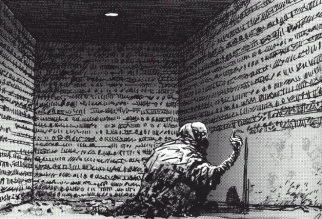 HP Lovecraft was the master of weird fiction and was a great story-teller.  His rules for writing are basic and can apply to any fiction writing.

Good advice for all of us.